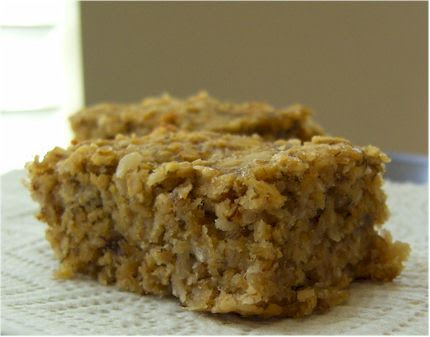 Directions
Preheat the oven to 350 F. Line a 9x13” baking dish with parchment. Set aside.
In a small saucepan mix the raisins, lemon juice, honey and pinch of salt until well combined. Add enough water to cover and turn on the heat to medium. Bring the mixture to a boil, then turn down the heat and let the filling simmer until almost all of the liquid has been absorbed and raisins are very tender, about 10 minutes. Remove from heat and set aside.

Meanwhile, prepare the crust. In a medium-mixing bowl, combine the flour, oats, bran, sugar, baking powder, and cinnamon and salt until well mixed. Stir in the soymilk, mixing until just combined.

Assemble the bars. Spread half of the dough into the prepared dish. Spread the raisin filling evenly on top of the crust, followed by the remaining dough. Sprinkle with extra sugar if desired, and bake until golden brown, about 25-35 minutes. Remove, cut into bars and serve warm or cold.
Posted by Dawn Lerman/Aka The Snacking Mama at 11:35 AM